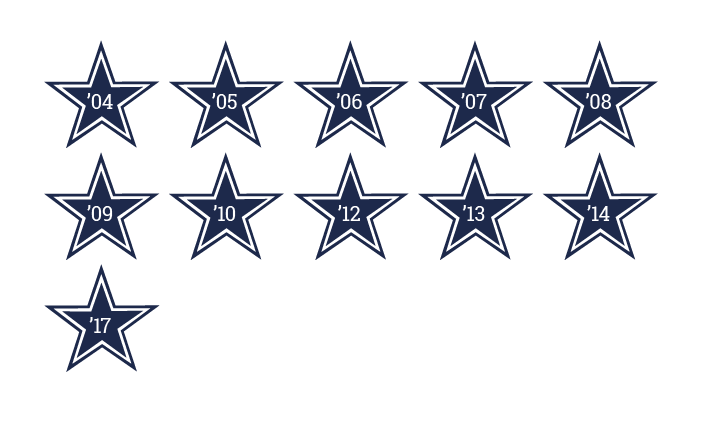 PRO: One of the top tight ends in NFL history, an 11-time Pro Bowler, two-time first-team All-Pro and the 2012 Walter Payton Man of the Year, joins the Silver and Black to embark upon his 17th professional season after spending 16 years with the Cowboys (2003-17, 2019). A former third-round selection (69th overall) by the Cowboys in the 2003 NFL Draft has posted a staggering 1,215 receptions for 12,977 yards and 72 TDs. Leaves Dallas as the franchise’s all-time leader in receptions and receiving yards, while ranking second in both offensive categories among all tight ends in NFL history and second among all active players…Currently sits second in Cowboys history with 72 receiving TDs, good for fourth among all active players…He also holds the club’s record with 130 consecutive games tallying at least one reception…Witten’s incredible resume includes four 1,000-yard seasons, four 90-reception seasons, six 80-reception seasons and a remarkable 15 seasons with at least 60 receptions, tied for second-most in NFL history with Hall of Fame TE Tony Gonzalez and WR Larry Fitzgerald, trailing only Pro Football Hall of Fame WR Jerry Rice (17)…In 2019, he also joined those three players as the fourth person ever to record over 1,200 receptions for their career…His 11 Pro Bowl appearances tie DL Bob Lilly for the most in Cowboys histroy…In his return to the gridiron last season following a year of retirement, Witten started in all 16 games for the 13th time in his career, tallying 63 receptions for 529 yards and four TDs…In Week 1 of 2017, became the club’s all-time receiving yards leader, passing Wr Michale Irvin (11,904)…In 2016, finished second on the team in receptions (69) and third in yards (673) and established club records for most games started and consecutive starts…One of his finest seasons came in 2012 when he established a then-NFL tight end record with 110 receptions – since broken by TE Zach Ertz (116 in 2018) – and recorded his fourth 1,000-yard season (1,039)…His 110 catches led the club for the sixth straight (seventh overall season), aided by a Dallas and tight end single-game record of 18 catches…For his work on and off the field, Witten was honored with the Walter Payton Man of the Year Award that same season…In 2007, he became the first tight end in franchise history – 13th in league history – to top 1,000 yards in a season with his first 1,000-yard effort…The longest tenured Cowboy in club history, Witten has appeared in a total of 255 contests and made 245 starts over his career, the fifth-most appearances by an active player in the NFL, trailing only K Adam Vinateri (365), QB Tom Brady (285) and QB Drew Brees (275)…In postseason action, he has started in all eight appearances and recorded 45 receptions for 486 yards and one TD.