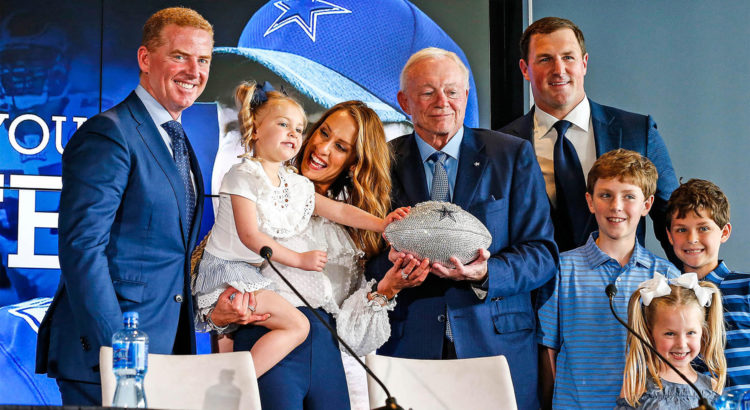 For 15 years, Witten refused to let anyone down. Not teammates, not coaches, not the Jones family, certainly not himself.

The outpouring of support from friends, family and colleagues who attended Thursday’s announcement was heartwarming confirmation.

No, Jason Witten never let anyone down.

For 15 years, he lifted others up.

“You’re an inspiration to me as well as everybody that’s ever said they were a Dallas Cowboy,” Jerry Jones said.

Back to the Jaw Story. Witten missed one game with that injury, his face so swollen at first that the 21-year-old rookie looked almost unrecognizable.

He recounted his encounter with Parcells in the old Valley Ranch training room with crystal clarity. Parcells said his former New York Giants tight end, Mark Bavaro, missed only one game with the same jaw issue. He challenged Witten. Told him “the best ones, they find a way.”

Witten got back on the field in a week. He never missed another game in his 239 total appearances, a Cowboys record.

That gritty durability and dependability – not to mention his outstanding ability as the Cowboys’ all-time receptions and receiving yardage leader – made Witten a fan favorite, a team captain, and a likely Pro Football Hall of Famer in the coming years.

Hundreds of staff members lined the hallways of The Star in Frisco to welcome Witten, his wife Michelle and their children. Dozens of coaches, teammates and executives attended the press conference. Others congratulated him via social media.

“He’s simply the best example I know of, of what you want a football player and a person to be on and off the field,” Cowboys head coach Jason Garrett said.

Witten thanked them all, as well as Cowboys Nation. He mentioned several of his younger teammates by name. Said it was time to “pass the torch to the next generation of Dallas Cowboys and retire from the National Football League.”

“I never wanted this day to come. But it does come for all of us,” he said.

He’ll remain around the game of football in a different capacity: NFL broadcaster. ESPN formally announced after the press conference that Witten will join their new Monday Night Football commentator team.

The decision wasn’t easy. Witten admitted he went back and forth over the last several days. He ultimately came to this conclusion: “Better three hours too soon than a minute too late.”

The Cowboys remained supportive throughout the process. When reaching his final decision to retire and pursue TV, Witten said Jones encouragingly told him, “Go be John Wayne.”

Witten retires as an 11-time Pro Bowler; a Walter Payton NFL Man of the Year winner; and the Cowboys’ all-time leader in games played (239), consecutive games, consecutive games started (179), receiving yards (12,448) and catches (1,152) – the fourth-highest total in NFL history and second among tight ends behind only Tony Gonzalez.

He ends his playing career with very few regrets. (“He emptied his bucket here,” Jones said.) But Witten did express remorse that he couldn’t get the Cowboys to another Super Bowl during these last 15 years.

“The hardest part of this decision was knowing that I would never be able to hand you that Lombardi Trophy,” he said to Jones, his voice shaking.

Again, that fear of letting others down. He didn’t. His impact on the organization extends far beyond stats or wins and losses.

Coaches, teammates and colleagues say Witten set a new standard for how to work and perform at an elite level on a daily, weekly, yearly basis.

“His humility and his dependability are unmatched,” Jones said.

And perhaps never to be rivaled.

Source: An “Inspiration,” Witten Retires With A Legacy Of Leadership, Dependability