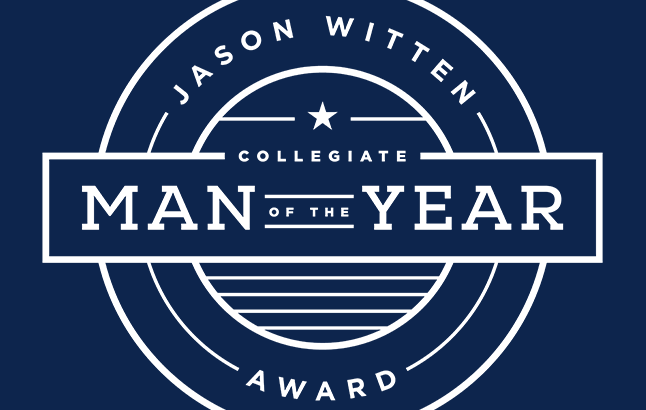 DALLAS (Dec. 15, 2021) – The three finalists for the fifth annual Jason Witten Collegiate Man of the Year were announced today. In line for the award, which recognizes exemplary leadership both on and off the field, are Grant Morgan of Arkansas, Joshua Paschal of Kentucky and Patrick Fields of Oklahoma.

Selected from a group of 20 semifinalists by a subset of the Jason Witten Collegiate Man of the Year Board of Directors, the three finalists have all demonstrated an outstanding record of leadership by exhibiting exceptional courage, integrity and sportsmanship. The winner will be announced at an award ceremony in Frisco, Texas, on February 17, 2022.

“I am excited to announce these three outstanding young men as the finalists for the fifth annual Collegiate Man of the Year,” said Witten. “Grant Morgan, Joshua Paschal and Patrick Fields have all demonstrated exceptional leadership on and off the field, and set the standard for what being a student-athlete is all about. It’s nearly impossible to choose just three from all of the great players nominated. There are so many great representatives for college football, and I commend all of the nominees for the tremendous example of leadership they set on the field, on campus and in the community.”

Grant Morgan, Arkansas (Sr., LB) – Morgan recently won the Burlsworth Trophy given to the nation’s most outstanding player who started his career as a walk-on. He rose to become one of the nation’s top linebackers after starting his career without a scholarship. His play on the field earned him All-SEC and second-team All-American honors last season, and he accumulated 96 tackles an interception this year. His efforts in the classroom and in the community made him one of 13 finalists for the William V. Campbell Trophy. He is a two-year captain for the Hogs and was a member of the SEC Football Community Service Team in 2020.

Joshua Paschal, Kentucky (Sr., DE) – The only three-time full season captain in the history of Kentucky football, Paschal beat cancer in 2018, after undergoing three surgeries and monthly immunotherapy treatment, and has played in 49 games in his career and ranks tied for third on UK’s career tackles for loss list. He was recently named first team All-SEC and second-team All-American. He was elected one of three representatives for UK Football on the Student-Athlete Advisory Committee (SAAC) and the SEC Football Leadership Council, and he is a member of the Dean’s List and SEC Academic Honor Roll. Paschal led a peaceful walk for racial and social justice in the city of Lexington, as well as a player demonstration during training camp in 2020 to raise awareness for those issues.

Patrick Fields, Oklahoma (Sr., S) – A two-year captain for the Sooners, Fields was a finalist for both the William V. Campbell Trophy, given to the player with the best combination of academics, community service and on-field performance, and the Wuerffel Trophy, given to the player who demonstrates exemplary community service. He served for two years on the NCAA Division I Football Oversight and Competition Committee, and he finished second on his team in tackles. Fields is involved in and has founded countless community initiatives in Norman and his hometown of Tulsa.

The Jason Witten Collegiate Man of the Year, presented by Albertsons and Tom Thumb, is the first college football honor to focus primarily on a player’s leadership, both on and off the field. The inaugural award was presented to UCF’s Shaquem Griffin. Wisconsin’s D’Cota Dixon earned the honor in 2018, Tennessee’s Trey Smith won the award in 2019 and Texas’s Sam Ehlinger took home the trophy last year.

Leadership is a term synonymous with Jason Witten, who, in addition to becoming one of the best tight ends in the history of the sport and the Cowboys’ all-time leading receiver, served as one of football’s most prominent role models during his 17-year pro career. In addition to winning the Walter Payton NFL Man of the Year Award in 2012, Witten has also received the Bart Starr Award, Pro Football Weekly’s Humanitarian of the Year Award, Home Depot NFL Neighborhood MVP and the Bob Lilly Award, among many others. All of those honors have recognized his work in the community, achievements on the field and dedication to his teammates and family.

The winner of the Jason Witten Collegiate Man of the Year will also receive a $10,000 contribution in his name to his school’s athletic scholarship fund. The contribution will be made by Jason Witten’s SCORE Foundation, the official charity of Jason and his wife Michelle. The SCORE Foundation, founded in 2007, has positively impacted tens of thousands of children and families in Texas and Tennessee over the last 13 years. The foundation operates its nationally-recognized SCOREkeepers program, which places trained male mentors on staff to work with children at family violence shelters, at nine shelters in the three states. SCORE has also operated a weekend food backpack program for disadvantaged children in North Texas, opened Jason Witten Learning Centers in five different Boys & Girls Clubs and opened the Jason and Michelle Witten Emergency Waiting Room at the Niswonger Children’s Hospital in Johnson City, Tenn.