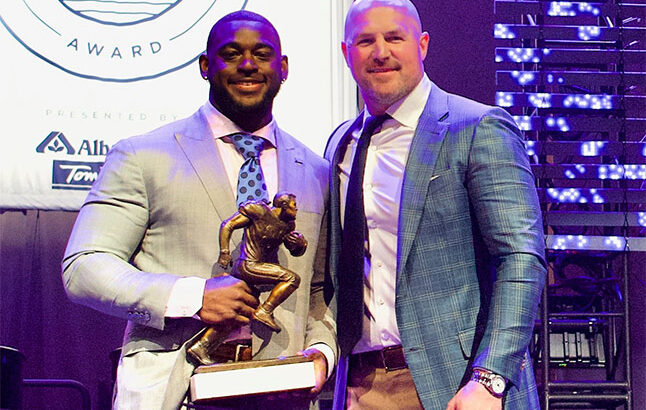 DALLAS (Feb. 17, 2022) – Kentucky’s Joshua Paschal has been selected as the Jason Witten Collegiate Man of the Year. Former Dallas Cowboys tight end Jason Witten presented Paschal with the award at a ceremony tonight in Frisco, Texas.

“I am honored to present the fifth annual Collegiate Man of the Year to Josh Paschal,” said Witten. “He is a very impressive young man and a great leader. He overcame cancer and a lot of challenges that went along with that to become a great player and a great role model, on campus and in the community. He is a perfect example of what a college student-athlete can be.”

The only three-time full season captain in the history of Kentucky football, Paschal beat cancer in 2018, after undergoing three surgeries and monthly immunotherapy treatment, and has played in 52 games in his career and ranks tied for third on UK’s career tackles for loss list. He was recently named first team All-SEC and second-team All-American. He was elected one of three representatives for UK Football on the Student-Athlete Advisory Committee (SAAC) and the SEC Football Leadership Council, and he is a member of the Dean’s List and SEC Academic Honor Roll. Paschal led a peaceful walk for racial and social justice in the city of Lexington, as well as a player demonstration during training camp in 2020 to raise awareness for those issues.

Paschal was chosen as the recipient of the award among three finalists, which also included Oklahoma’s Patrick Fields and Arkansas’s Grant Morgan.

“Josh is a very deserving winner of this award,” said Witten. “However, it was a near impossible task for the selection committee to choose a winner from these three finalists. Patrick and Grant are both outstanding leaders and have taken active roles on campus and in the community. All three of these men have extremely bright futures, both on and off the field.”

The Jason Witten Collegiate Man of the Year, presented by Albertsons and Tom Thumb, is the first college football honor to focus primarily on a player’s leadership, both on and off the field. The inaugural award was presented to UCF’s Shaquem Griffin in 2017. The second annual award was presented to Wisconsin’s D’Cota Dixon in 2018. Tennessee’s Trey Smith took home the honor in 2019, and Sam Ehlinger of Texas won the award last year.

A $10,000 contribution will be made in Paschal’s name to Kentucky’s athletic scholarship fund. The contribution will be made by Jason Witten’s SCORE Foundation, the official charity of Jason and his wife Michelle. The SCORE Foundation, founded in 2007, has positively impacted tens of thousands of children and families in Texas and Tennessee over the last 14 years. The foundation operates its nationally-recognized SCOREkeepers program, which places trained male mentors on staff to work with children at family violence shelters, at nine shelters in the two states.