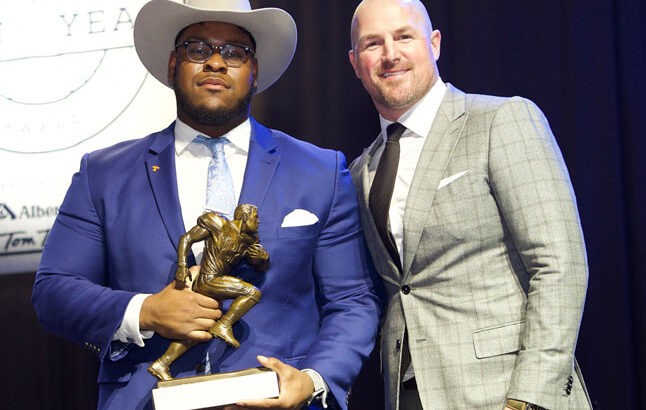 DALLAS (Feb. 18, 2020) – Tennessee’s Trey Smith has been selected as the Jason Witten Collegiate Man of the Year. Former Dallas Cowboys tight end Jason Witten presented Smith with the award at a ceremony tonight in Frisco, Texas.

“I am honored to present the third annual Collegiate Man of the Year to Trey Smith,” said Witten. “He is a truly impressive young man, who is everything you want in a college football player. He has overcome a lot of adversity to become a true leader on his team, on campus and in the community. He is the perfect example of someone who has devoted himself to becoming the very best person he can be, despite going through great personal struggles.”

One of the most dominant linemen in football and a 2019 first-team All-SEC honoree, Smith was a Freshman All-American who had to fight his way back on the field after being diagnosed with blood clots in his lungs before the start of his sophomore season. His return to the field and excellent play this season has been an inspiration to his team. A member of the 2018 SEC Community Service Team and a Wuerffel Trophy nominee, Smith spearheaded a coat drive for the Knoxville Area Rescue Ministry and was selected as a member of the 2018 VOLeaders Class, a group of leaders chosen across all sports at Tennessee.

Smith was chosen as the recipient of the award among three finalists, which also included Air Force’s Isaiah Sanders and Southern Cal’s Michael Pittman, Jr.

“Trey is a very deserving winner of this award,” said Witten. “However, it was a near impossible task for the selection committee to choose a winner from these three finalists. Isaiah and Michael are both outstanding leaders and have taken active roles on campus and in the community. All three of these men have extremely bright futures, both on and off the field.”

A $10,000 contribution will be made in Smith’s name to Tennessee’s athletic scholarship fund. The contribution will be made by Jason Witten’s SCORE Foundation, the official charity of Jason and his wife Michelle. The SCORE Foundation, founded in 2007, has positively impacted tens of thousands of children and families in Texas and Tennessee over the last 11 years. The foundation operates its nationally-recognized SCOREkeepers program, which places trained male mentors on staff to work with children at family violence shelters, at nine shelters in the two states.