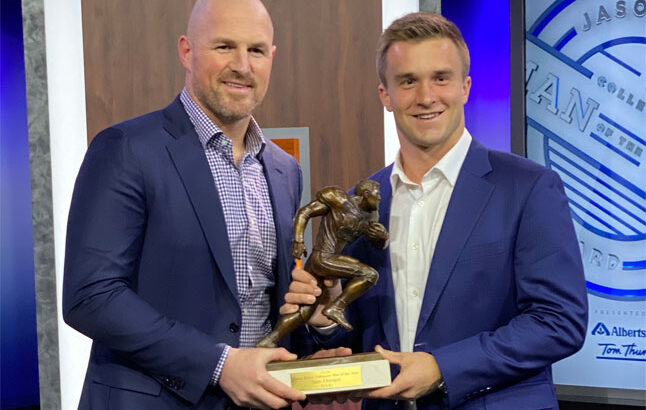 “I am honored to present the fourth annual Collegiate Man of the Year to Sam Ehlinger,” said Witten. “Sam really embodies everything great about college football. He has overcome a lot of adversity to become a true leader on his team, on campus, in his family and in the community. He is the perfect example of someone who has devoted himself to becoming the very best person he can be, despite going through the struggle of losing his father when he was young.”

Ehlinger finished his career at Texas leading all FBS active quarterbacks in career total offense, and on the watch list for the Maxwell, Unitas, O’Brien and Manning Awards, given to the nation’s top QB. He was also a finalist for the Cambell Trophy and the Wuerffel Trophy and has been selected to the AFCA Allstate Good Works Team for his work in the community, including a campaign to raise funds for COVID relief which has netted nearly $200,000. Ehlinger was only the seventh two-time captain in Longhorn history, and he overcame the death of his father at a young age.

Ehlinger was chosen as the recipient of the award among three finalists, which also included Alabama’s Najee Harris and Notre Dame’s Daelin Hayes.

“It is truly an honor to receive and represent the Jason Witten Collegiate Man of the Year award,” said Ehlinger, who is currently preparing for the NFL Draft. “I am very thankful for people like Jason who have set the path for people like me to try and follow on and off the field.”

“Sam is a very deserving winner of this award,” said Witten. “However, it was very difficult for the selection committee to choose a winner from these three finalists. Najee and Daelin are both outstanding leaders and have taken active roles on campus and in the community. All three of these men have extremely bright futures, both on and off the field.”

The Jason Witten Collegiate Man of the Year, presented by Albertsons and Tom Thumb, is the first college football honor to focus primarily on a player’s leadership, both on and off the field. The inaugural award was presented to UCF’s Shaquem Griffin in 2017. The second annual award was presented to Wisconsin’s D’Cota Dixon, and last year’s honor went to Tennessee’s Trey Smith.

A $10,000 contribution will be made in Ehlinger’s name to Texas’s athletic scholarship fund. The contribution will be made by Jason Witten’s SCORE Foundation, the official charity of Jason and his wife Michelle. The SCORE Foundation, founded in 2007, has positively impacted tens of thousands of children and families in Texas and Tennessee over the last 13 years. The foundation operates its nationally-recognized SCOREkeepers program, which places trained male mentors on staff to work with children at family violence shelters, at nine shelters in the two states.