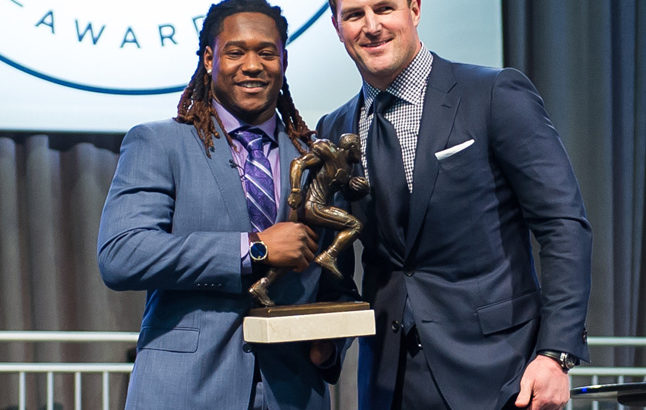 DALLAS (Feb. 22, 2018) –UCF’s Shaquem Griffin was named the inaugural winner of the Jason Witten Collegiate Man of the Year at an award ceremony in Frisco, Texas. Griffin was selected the winner among a group of finalists that included Oklahoma State quarterback Mason Rudolph and Alabama defensive back Minkah Fitzpatrick.

The award honors the college player who has exemplified the best leadership on and off the football field during the season, something Griffin certainly did in leading UCF football’s turnaround from winless to undefeated in the past two years.

He was named the American Athletic Conference defensive player of the year for the 2016 season. Then, in 2017 Griffin helped the Knights finish 13-0. He was named the defensive MVP of the Peach Bowl and was a second-team All-America selection by the American Football Coaches Association. He was also honored as the Senior CLASS Award winner for the NCAA and received the 2018 Rare Disease Champion Award from Uplifting Athletes.

Griffin had his left hand amputated as a child as a result of a rare birth defect.

“Whoever thought a kid like me, growing up where I’m from and going through all the adversity I had, to be able to have the opportunity to be here for a major award and a major event,” said Griffin, who is preparing for the upcoming NFL Draft in May.

The Jason Witten Collegiate Man of the Year, presented by Albertsons and Tom Thumb, is the first college football honor to focus primarily on a player’s leadership, both on and off the field. Leadership is a term synonymous with Jason Witten, who, in addition to becoming one of the best tight ends in the history of the sport and the Cowboys’ all-time leading receiver, has served as one of football’s most prominent role models during his 15-year pro career. In addition to winning the Walter Payton NFL Man of the Year Award in 2012, Witten has also received the Bart Starr Award, Pro Football Weekly’s Humanitarian of the Year Award, Home Depot NFL Neighborhood MVP and the Bob Lilly Award, among many others. All of those honors have recognized his work in the community, achievements on the field and dedication to his teammates and family.

“I am truly honored to present the inaugural Collegiate Man of the Year award to Shaquem Griffin,” said Witten. “Shaquem embodies everything that is great about college football and everything that makes a great leader. He has obviously overcome a lot of adversity to accomplish all that he has, and the fact that he gives so much of himself to the community makes him even more impressive.”

Griffin will also receive a $10,000 contribution in his name to his school’s athletic scholarship fund. The contribution will be made by Jason Witten’s SCORE Foundation, the official charity of Jason and his wife Michelle. The SCORE Foundation, founded in 2007, has positively impacted tens of thousands of children and families in Texas and Tennessee over the last 10 years. The foundation operates its nationally-recognized SCOREkeepers program, which places trained male mentors on staff to work with children at family violence shelters, at nine shelters in the two states. SCORE has also operated a weekend food backpack program for disadvantaged children in North Texas, opened Jason Witten Learning Centers in five different Boys & Girls Clubs and opened the Jason and Michelle Witten Emergency Waiting Room at the Niswonger Children’s Hospital in Johnson City, Tenn.